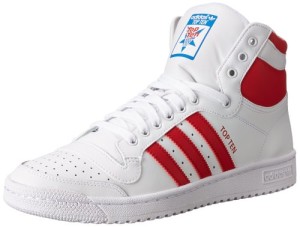 Adidas Top Ten High is a shoe that was originally designed in the 80’s by Adidas for the top ten best basketball players at that time. In those days there were not a lot of basketball shoes to choose from like nowadays, so this shoe became very popular in not only the basketball community but also for casual wear because of the sleek and versatile look of the sneaker.

The shoe was rereleased in the 90’s and in the 2000’s which brought back the shoe to its fame. The shoe provides the OG feel and look to it with the rubber outsole, cushion padded ankle collar, and the color way. The shoe has a rubber outsole with old school herringbone traction which allows for good grip on the court for sudden movements. The shoe comes in many different color ways, including the OGs and new release inspired by the famous rapper 2 Chains. 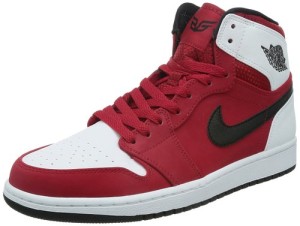 Jordan brand is very famous in  the basketball community. There is nothing more classic than the Air Jordan 1 Retro high basketball shoe. Jordan 1 was originally released in 1985, but then rereleased in 1994. This shoe was famous in the NBA because of the objections on its color. As Michael Jordan played for Chicago Bulls. the shoe was designed to match the team uniform, however officials objected that it does not have enough white color, thus the shoes were banned. These shoes also became famous when Nike started a marketing campaign that the shoes gave an advantage to the player when worn.

The shoe has an old school sneaker look with a rubber outsole that provides great traction both indoor and outdoors. The shoe being from an old era does have its drawbacks. Compared to modern basketball shoes the shoe does not provide strong impact protection. The shoe uses nike zoom for cushioning which offers minimal impact protection in the heel area. 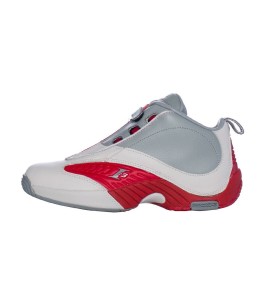 One of the greatest players of the 90’s era was Allen Iverson. Iverson was famous for his signature crossover in the NBA. He was one of the first few players to have their own signature shoes. Reebok Answer IV was a late 90’s shoe that brings the old school feel with a bit of a modern touch.

This shoe was one of the most famous signature shoe of the star NBA player Allen Iverson. The shoe features a rubber outsole with thick herringbone groves to allow for great traction which makes it a versatile shoe for indoor and outdoor basketball. The shoe features the signature Reebok DMX cushioning which provides with impact protection for any sort of play style.

Out of these 3 shoes, my personal choice would be the Adidas Top Ten High. These shoes are not only good for basketball, but are also very stylish and can be worn off the court. The white and red color gives these shoes a classic look. If you are looking for a retro shoe that is stylish, durable and represents the 90s, then be sure to check out this shoe.