Are you confused on choosing which shoes do you want to buy? Is it Nike Kobe 9 EM or Kobe 9 Elite? As we all already know that Nike is the most popular shoe production during 2014. In addition, some people do believe that Nike quality and popularity still stable during 2015. Why do I only mention those two kinds of Nike shoes? Some people like to compare two things which are similar.

Those two kinds of shoes are almost similar in terms of material, fit, traction, cushion, support and ventilation. To make you sure which shoes that you are going to buy, let’s peek up the Kobe 9 EM review below. 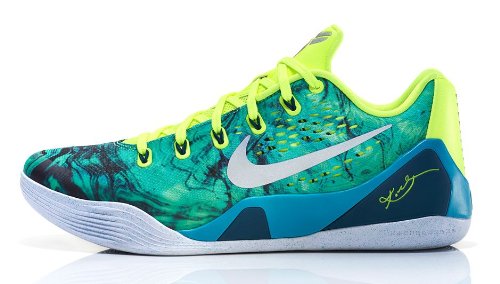 Nike shoes are popular with the quality of their traction, fit, support and cushion parts. There is no doubt from the people who already use Nike products about those four parts that always amazed the users.

While comparing to the Kobe 9 Elite, Kobe 9 EM is pretty much identical. That’s because Nike changes the material of the shoes which affects the traction, fit, cushion and support of this shoe. They change it to little Fuse so it fits perfectly to the foot.

Material of the shoes

The Kobe 9 Elite is using Flyknit material as the main material of the shoes. While Kobe 9 EM changes it to a little Fuse to Engineered Mesh. Flyknit is more durable than Engineered Mesh but it breathless so it caused hot if use it in a long time. However, engineered Mesh is easy to rip like it happens in Kobe 8. To be used in Kobe 9 EM, the Mesh is thicker to prevent the shoes from being ripped easily.

Nylon material for the interior of Kobe 9 EM helps the foot feel more comfortable and fits it properly. Yet, there is nothing to complain about those two kinds of material on Kobe 9 Elite and Kobe 9 EM.

Other supports of the shoes

See the Price and User Review of Nike Kobe 9 EM

See the Price and User Review of Nike 9 Elite